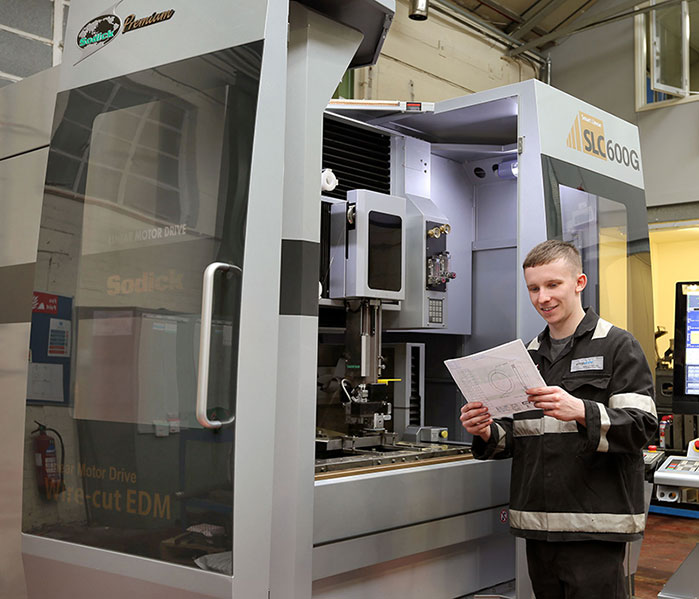 The business case for the machine, which replaced a 15 year old wire EDM supplied by another manufacturer, could be justified simply on the ability to use lower cost wire and consumables. However, in addition, the arrival of the Sodick machine with its linear motor drive technology, is allowing the company to cut workpieces some four times faster, thus quadrupling capacity.

“We acquired our first wire EDM for the toolroom around 15 years ago, however, late last year we reviewed how much the spare parts, repairs and downtime were costing us,” explains Peter Richards, Technical Manager of Central Services. “Together with the fact that the machine required the use of expensive wire, and that we could only achieve relatively slow cutting speeds, we decided to put in a capital expenditure request for a replacement machine. Just based on the fact that a new EDM would allow us to use far cheaper wire, we were able to justify the investment.”

Installed at the end of July 2015, the machine at voestalpine Mestec runs almost constantly, producing tooling such as press tools, die sets, cut-off tools, blades and many more types of general consumables, typically from D2 tool steel. Although the tools are complex and call for tight tolerances and high surface finish, the requirements are well within the capability of the Sodick SLC600G.

“We’re extremely pleased with the performance of the machine,” states Mr Richards. “Jobs that would previously require 2-3 days of cutting time can now be completed within a day. This has created a lot more capacity and allowed us to recall many jobs that were previously subcontracted, saving yet more costs.