A new Sodick AQ750LH wire eroder with linear motor technology and extended Z-axis column height has been installed by Sodi-Tech EDM at the Newbury facility of Brite Precision, a Reaction Engines company, where it is earmarked for use on the exciting Skylon project, an unpiloted, reusable spaceplane intended to provide inexpensive and reliable access to space.

The innovative, 82m long Skylon vehicle consists of a slender fuselage (6.25m diameter) containing propellant tankage and payload bay, with delta wings attached midway along the fuselage that carry the Sabre engines in axisymmetric nacelles on the wingtips. The Sabre engines have dual-mode capability: in rocket mode the engine operates as a closed cycle Lox/Lh2 high specific impulse rocket engine, while in air-breathing mode (from take-off to Mach 5) the liquid oxygen flow is replaced by atmospheric air, increasing the installed specific impulse up to six-fold. The airflow is drawn into the engine via a two-shock axisymmetric intake and is cooled to cryogenic temperatures prior to compression. The hydrogen fuel acts as a heatsink for the closed cycle helium loop before entering the combustion chamber.

The high-tech engineering involved on the project calls for a special type of manufacturing expertise. With this in mind, Skylon’s developer, Abingdon-based Reaction Engines Ltd, was two years ago looking to acquire a company with the required machining and manufacturing skills to help produce some of the complex parts for this groundbreaking spaceplane.

Brite Precision was identified to serve as Reaction Engines’ manufacturing arm thanks to its proven track record as an established subcontract supplier of parts for gas panels, cryostats, goniometers, mirror mounts and remote handling equipment, typically in batches of 50-60-off. Brite’s portfolio was a good fit for Reaction Engines and the deal to acquire the company was followed by a programme of investment to upgrade certain aspects of plant capability. Among the top priorities was a wire EDM, a move that would negate the need to continue subcontracting this requirement.

“Not only would this aid confidentiality around Skylon, it would also bring greater control to our manufacturing process and cut subcontract costs for wire EDM, which previously were around £40,000 per annum,” explains the company’s workshop supervisor, Bob Harris. “We went to the MACH machine tool exhibition at the Birmingham NEC last year and although we saw a lot of machines, the Sodick AQ750LH was clearly the most impressive and so we placed the order.” 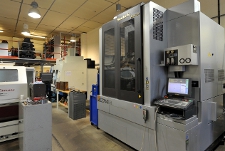 In actual fact, the Sodick machine has been acquired for a very specific Skylon job, one that requires a working Z-axis height of 600mm, even though this has yet to be started. The reason for the slight delay is because Skylon is essentially only in early development – the vehicle will take approximately 10 years to develop fully. Ultimately, the wire EDM job for Skylon, which is imminent, will involve a long tubular heat exchanger component made from Inconel that has 800 smaller tubes inside – these need to be cut to length inside the bore.

Reaction Engines is a world authority in heat exchanger technology for the engines of advanced reusable space launchers. Skylon’s Sabre engines employ an extremely smart pre-cooler heat exchanger system ahead of its compressor. If it didn’t, the gases entering the engine intake at high speed would simply be too hot.

Capable of transporting 15 tonnes of cargo into space, Skylon has been designed as a practical utilitarian machine for use by competitive commercial operators. This is seen as the most effective way to ensure that space transportation assumes its proper place in the economy and its continued improvement under operators and customers will dictate what Skylon are used for. Though Skylon primary function will be launching satellites, consideration has also been given to its passenger carrying capabilities. Current development options allow the transport of 20 ‘tourists’ when orbital facilities exist to accommodate them. However, anyone interested in taking up the opportunity will likely have to part with around $500,000 for the privilege.

Riding in the Skylon spaceplane will undoubtedly be a high quality experience, not dissimilar to the EDM capability offered by Brite Precision’s new AQ750LH, which features Sodick’s Linear Motor technology in the X, Y, U and V axes, and a 10-year positioning accuracy guarantee. It also offers a fixed table design that allows for components of greater size and weight to be machined without affecting table positioning or workpiece accuracy.

“Since the takeover by Reaction Engines I’ve been on quite a few training courses for various pieces of new machinery, but the Sodi-Tech course was one of the best,” he says. “The programming is easy to follow – either online or offline – and the machine does everything it’s told. We hold tolerances of 0.01mm or less, but nothing seems to be a problem. Put it this way, the next time we expand we’ll be getting another Sodick EDM.”